Stay updated! Learn how the virality system works on promotions.

Facebook is a dynamic platform, and here at Easypromos we know that we have to adapt to the changes that are introduced in order to take advantage of any new features whilst keeping up to date with the promotions guidelines and continuing to comply 100% with Facebook’s rules and recommendations.

We also know that it’s important to introduce new features so that administrators can create better promotions, sweepstakes and contests, enabling them to attract more new fans and users.

This week we have updated Easypromos Basic. The new version provides the following three enhancements:

Users who enter a Basic promotion will now, upon finalising the registration process, be able to do the following:

In addition we have introduced a new feature that provides users with more ways of making the promotion viral. If a user has already entered the promotion and they try to enter again they will be redirected to a new screen with a message that tells them they are already taking part. They will then be offered the chance to invite more friends and post the promotion on their wall again. This will increase the impact of the viral tools on those taking part in a promotion.

The new viral system keeps the viral statistics that administrators have about each user: number of friends invited and information regarding whether or not they have posted the promotion on their wall. 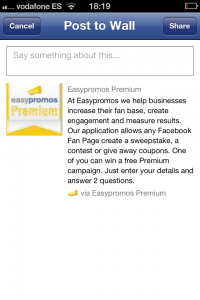 As we noted in our last post, all promotions in Easypromos Basic are accessible from mobile devices supported by Facebook’s development platform for mobiles: iPhone, iPad, iPod and Android.

It is not necessary for administrators to create new images for mobile devices as the same graphics can be viewed perfectly from mobile telephones.

Note: Neither Facebook’s native application for iPhone, iPad and Android, nor the mobile version of Facebook, http://m.facebook.com, support the display of tabs. In order for users to see the promotion from their mobile devices, they must access via the post on the page wall that is generated when the “promote” feature is used. This feature is available in the Easypromos administration area.

Fast, scalable platform that is in line with Facebook

The new architecture of Easypromos Basic shares the same engine as that of Easypromos Premium and Easypromos White Label, making the user’s experience in navigating through the promotion much faster. The administrator will find that management of the promotion has been made much more agile.

In addition, the new architecture is more flexible and scalable and will make it easier to incorporate future improvements in the application.