Analyze how many new users and fans are recruited by participants

One of the most important phases in the development of a promotion is the results analysis, once the promotion or contest has finished. In Easypromos the administrators can obtain a complete list of participants with all their registration details. They can then measure the total participation in a promotion. What’s more, Easypromos White Label administrators can see the results of a promotion’s impact via statistics from Google Analytics and Facebook Insights.

This post is out-dated. Check here all the information on statistics and results.

Until now, to help you measure the virality of a promotion in Easypromos we have included information about the number of friends invited by each user and the posts on the wall or Timeline via Easypromos’ viral system. Today we present a new feature that will enable you to measure the tracking of the invitations. That is to say, the new fans and participants that a user has recruited via their invitations, recommendations and votes.

This new feature is 100% compatible with mobile devices.

How does it work?

In the list of entries in the control panel of your promotion we show more information about each of the users who have taken part:

What’s more, from the header of the same page you can now order the entries by «Most users recruited» and «Most fans recruited», as well as the previous options. We have also added a counter of the total number of fans obtained in the whole promotion:

It should also be noted that you can see which users have been invited or recruited, and which have become fans of your page, thanks to activity by a specific user by simply clicking on any of the links that appear beside the corresponding counters.

The feature of seeing which friends have been invited already existed, but now we have added the option to see which of them has accepted this invitation.

How do you determine these values?

There are basically 2 ways of accessing an Easypromos promotion:

Whenever someone accesses the promotion from a link published on the wall of a Facebook user and proceeds to interact with the promotion (by entering or simply clicking «Like») they are considered to have done so thanks to this participation. The user who posted the link will therefore be considered a «recruiter».

It is important to bear in mind that the recruiter is the author of the entry, not the one who shares the link (unless they are the same user).

Any interaction by a user recruited from an invitation that takes place during the 24 hours following his or her recruitment (having accepted an invitation) will be taken into account when assessing the recruiter. The exception to this would be if a user, having been recruited by one participant, then clicks on «Like» for a different entry.

Similarly, if we are outside these parameters, the «Likes» will be counted but they will not be assigned to any recruiter (even though the user may have learned of the promotion thanks to a specific user, the 24 hours margin has passed).

Note: All measurements shown in the promotions are taken from March 1, 2012.

We have redesigned the system for becoming a fan of a page in order to:

Below you can see the current system for becoming a fan of Premium and White label promotion. If the user is not a fan, the Like box will appear, attached to the send entry form button:

Note: In the case of a White Label promotion in which the CSS styles of the entry form have been personalized, this will not be affected at all as the Like box adapts to the existing design without the need for further personalization: 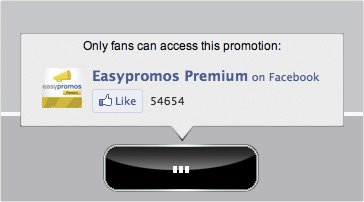 Similarly, if we access the list of entries directly, without being a fan, the «Like» button is now associated to each one of the entries, and therefore accounted for in the specific count of «fans recruited» for the author of this entry: