How to publish an Easypromos promotion on a Facebook Timeline

Posted in: Applications for FacebookLast update: 24/11/20

Once a promotion or contest is activated, the communication and diffusion actions start in order to reach our followers and target public. In this tutorial we explain all the steps you need to follow in order to successfully publish a promotion in the Timeline taking into account the new design of Facebook pages. We will also give some practical tips for promoting and communication your campaign with the aim of reaching all your fans.

In this tutorial, we will give recommendations regarding the different methods that exist in Easypromos and Facebook for successfully publishing a promotion on a Timeline. We understand ‘successful’ publishing of a promotion to be one which provides the maximum amount of information to the user regarding the promotion, in the way in which the administrator desires, and using an access link that works for all devices, including mobiles, smartphones, and tablets.

1. How to publish the promotion on the Facebook Timeline

2. How to customize the contest app

3. How to highlight the application within the page

1. How to publish the promotion on the Facebook Timeline

When a promotion with Easypromos is created, saved as a ‘Draft’ and a unique URL is generated, this becomes the direct access to the promotion. This link will be the final link and the one that needs to be used in all communication actions for the promotion: when sharing the promotion on the Timeline, when communication on Twitter or other social networks, when sending a Newsletter, when creating a banner, when launching a Facebook Ads campaign, etc.

You can share the promotion by means of the following methods:

1. Via the promotion direct link

Once the promotion is created, a unique link is generated, which is the link that needs to be used in order to communicate the promotion. This link is available in the promotion administration panel, as we show in the image below:

Important note: Use always the promotion main URL when sharing the promotion, since this link is 100% compatible with mobile devices and you will thus reach the greatest number of users.

In the image below we show an example of how to share the link of a promotion on the Timeline:

Note: When the promotion link is published on the page Timeline, Facebook reads the content of the promotion and automatically displays this content in the publication. This content can be edited at the moment of publishing the promotion, as we explain on the ‘Recommendations and tips’ of this tutorial.

In addition, in Premium and White Label versions administrators can customize the content that Facebook reads by default, by editing the viral content of the promotion.

From the promotion management page the administrator will find the ‘Share’ buttons to share the promotion via the following channels:

Note: In Premium and White Label versions of Easypromos, the administrator can customize the title and the description of the publication via the following fields: ‘Title of Facebook post’ and ‘Description of Facebook post’. These fields are available in the promotion edit form, under the section ‘Viral content’.

2. How to customize the contest app

When a promotion with Easypromos is created, this promotion is installed in an app within the Facebook page, and this app works as the direct access to the promotion. With the recent design that affects Facebook pages, third-party apps are still visible, although they are displayed in a different place within the page. Now apps can be accessed from:

1. From the ‘More’ option that is displayed in the top menu right below the cover image of the page, which shows a list of the apps installed in the page.

2. From the left column of the page, which displays a maximum of 3 apps.The first steps when creating a promotion is customize the app where the promotion will be published, so your users can easily identify the contest. You have the possibility to edit the following aspects:

Learn how to configure the contents of your apps on the following post.

3. Highlight the promotion within your page

All promotions created with Easypromos will be visible in the Facebook page through the application, which will be listed on the ‘More’ menu located right below the cover image.

In order to do so, once the promotion is activated we suggest you the following two actions to make the application more visible:

2. Place the app in the left column of the Facebook page. The left column reserved to the applications allows to show a maximum of 3 apps, which means that when the promotion is activated it won’t be probably displayed in this menu. However, enabling the app in this section of the page can mean more visibility for the promotion and attract more users.

This link is 100% compatible with mobile devices, so all your users will be able to enter, no matter the type of device used and thanks to responsive design the promotion adapts to all screen resolutions and devices, always offering an optimal view of the promotion.

Once you have the promotion main link, you’ll be able to create a customized link campaign to measure where the users who take part in your promotion come from, which will allow you to find out whether if a participant has accessed the promotion through the wall publication, via Twitter, through the Newsletter you sent or if he comes from a Facebook Ads campaign.

To do so, you can define utm_source, utm_medium and utm_campaign parameters, in order to distinguish the different traffic sources and, therefore, measure where your users come from.

We explain how to create your customized link campaign in the following tutorial.

3. Use Facebook Ads to give the promotion more visibility

One of the most effective ways of improving the visibility of the promotion is by means of Facebook advertising service, which allows to create an ad to promote the contest and generate traffic to the promotion.

In order to do so, you should access the Facebook advertisers’ site and create an ad to promote the contest. To do so, you will need to select the option ‘Clicks to Website’ and then insert the promotion main URL. 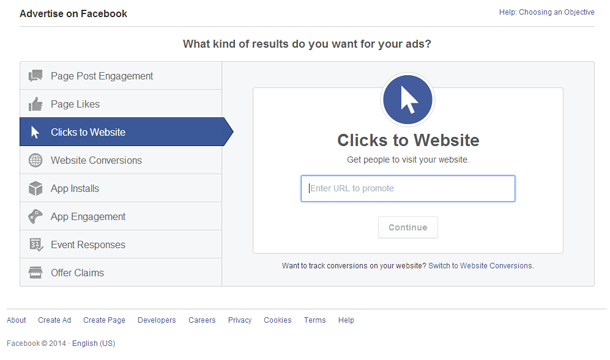 4. Plan a communication strategy to promote the contest

The majority of successful promotions, sweepstakes and contests in Facebook are responsive to a studied promotion and dissemination strategy.  Therefore, after communicating the promotion to our followers, it is important to plan a diffusion strategy that allows the promotion to reach the maximum number of users: Newsletter, promotion on other social networks, take advantage of your website to expand the reach of the promotion, complement with offline communication, etc.

We explain you these and other actions that will help you in the communication of the promotion to reach as many people as possible.

One of the most important parts in a promotion is the message it gives to your fans by means of the promotion main image and the title and description. With the aim of encouraging your followers and target to take part in the promotion, we suggest to consider the following aspects:

6. Publish the promotion in different occasions throughout the campaign

Once you have shared the promotion on the wall, we suggest you to continue posting and sharing the promotion with your followers throughout the whole campaign. You can take advantage of each new publication to inform your fans of the prizes of the day or the remaining time to take part in the contest. This follow-up will cheer on the users who are keeping an eye on the contest while attracting new participants.

Design and present your Facebook page with images and work art related to your contest topic throughout the whole campaign. For example, you can use the occasion to renew your cover photo, where you can include some information about the contest you are currently running.

This is the first image your users see when they arrive on your page, therefore, they will instantly find out about your new promotion.

8. Pin to top and highlight the promotion in the page Timeline

Once the promotion is published on the page wall, you can pin the post to the top of the wall, in order to keep it in a visible area to reach the greatest number of users. Additionally, Facebook offers the ‘Highlight’ tool, which allows to display a blue label with a star to emphasize that it is an important post.

9. You can overwrite the title and description in the Timeline

You can overwrite the title and description of the publication on the Timeline. Once you paste a direct link on your Timeline, you can modify the contents that appear by default (title, description and text of the link) to customize it according to your needs.

To do this you must first paste the URL and once the information is displayed, place the mouse over the content until it appears as highlighted in yellow. This will allow you to edit the text and, additionally, you will also be able to change the image that Facebook displays when reading the link.

10. Use online services to create a shorter URL and help share the promotion

By using URL reducers (like ‘bit.ly’ or ‘goo.gl’) you can use shorter, much more manageable links that are easy for users to copy, write and share on social networks such as Twitter.

These types of tools also offer statistics regarding each one of the links, thus giving you further insights into the impact of your posts and the diffusion of the promotion.

11. Be consistent in the Timeline if the promotion uses the country filter

Administrators can filter the promotion to a specific country, so that only the users who connect from this country can enter and take part in the promotion. It is therefore important to use the same filter when posting a promotion in your Timeline so that users in countries not included in the filter will not be able to see the link.

1. By clicking on the globe icon, a small window will pop-up, in which we can select the ‘Location/Language’ option:

2. A small form will appear in which you can enter the countries you wish to filter (that is, those countries where the promotion will be visible). It is also possible, but not necessary, to enter a specific region.

And more… In this post we recommend you 20 actions to spread your promotion to reach the maximum number of users, but the first action that needs to be taken is to make it public to your fans.