When Vodafone yu launched their new Facebook page, they chose to run a promotion where the users could win tickets to a radio show to attract new fans to the page.

JWTTalk, digital area of JWT, specialized on social media, search engines, digital analytics and online reputation and that manages the digital area of brands such as Vodafone yu:, developed an action with Easypromos with significant results, as much for its execution method as for its concept and methodology.

Vodafone Yu:, the young area of Vodafone, starts as a multiplatform which integrates radio, web and social networks. With the philosophy “Don’t miss anything”, it offers to the users’ community – yusers – of Vodafone yu: different offers on leisure and information of interest.

In order to boost participation and encourage the users’ interaction, the brand has a radio program at the Spanish radio station Los 40 principales (yu: No te pierdas nada), which broadcasts via streaming from 17:00 h. – 20:00 h. and on the radio station from 21:00 h. – 00:00 h.

At the same time that the brand Vodafone yu: was launching the new Facebook fanpage, the brand organized a promotion to give tickets to the yusers to attend the radio program yu: No te pierdas nada, which was broadcasted at the Círculo de Bellas Artes of Madrid the past 8th of February with the presence, as special guests, of Lorey Money, famous singer of Ola ke ase and Los Zombie Kids.

The mechanics of the promotion consisted on a registry form that the users had to fill with their name and e-mail, where they would receive the ticket to attend the radio program. 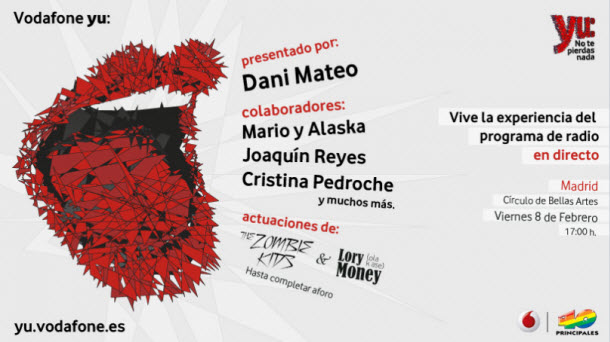 To let the people know the new Facebook profile of Vodafone yu: and migrate the users from another profile, which was more radio program-oriented. The aim was also to encourage the engagement with the followers of the previous fanpage by means of a contest that helped dynamize the community and that offered differential values.

The agency opted for the Easypromos White Label solution to organize the contest that allowed, by means of a simple registry form, to create interactions with the users both the online and the offline environment of the brand.

In order to broadcast and give the contest the maximum visibility by following the brand philosophy of multichannel platform, Vodafone Yu: used all their means of communication: social networks (Facebook and Twitter), communication on the website and the blog and, specially, mentions through the radio program during the previous days to the program, inviting and encouraging the listeners to get their ticket through the contest organized on the Facebook fanpage of Vodafone Yu.