The complete guide to controlling fraud in voting and recruiting contests

In this guide we’ll show you all the mechanisms and options for controlling and minimizing fraud in voting and recruitment contests. We’ll analyze the common scenarios of bad practices that can occur in these types of contests and explain the techniques that Easypromos offers to prevent them. If you would prefer to see a quick, illustrated summary of this guide then go to our infographic: ‘How to prevent fraud in your Facebook contests.’

Stay updated! The Fraud Control System on voting contest has been updated on May 2016. Read the updated information here.

Here are the contents of this guide:

1.  Common scenarios of bad practices in voting and recruiting contests

Common scenarios of bad practices in voting and recruiting contests

These are the three scenarios we have found to be the most common in Facebook and other internet contests:

1. Vote-exchanging or vote-buying webpages: Over the past year, tens of thousands of vote-exchanging pages have been created. There are also pages and forums in which it is possible to buy packs of votes. In such cases, for a fixed amount, sellers offer a number of votes which they claim are from real Facebook accounts, but not from users active in the page they become fans of.

2. Administrating multiple user accounts: Some users create various accounts, or administrate other users’ accounts, either because they have been given or have stolen the other users’ IDs. They then utilize the accounts to capture new votes or register multiple times for a sweepstake or recruiting contest, thus improving their chances of winning a contest.

3. Professionals in capturing votes: Some users dedicate themselves exclusively to taking part in contests, promotions and discounts, investing a great deal of time in keeping track of their contest entries.

Now we will show you all the techniques and tools offered by the Easypromos platform for minimizing the impact of all these bad practices. We have differentiated the options into preventive measures and analytical tools. The first of these two options serves to minimize the impact of bad practices via the configuration of the promotion, while the analytical tools enable the administrator to control and manage participants using information collected during the contest.

These measures correspond to options which can be configured from the contest set-up form.

1. Filter by country. Minimize the impact of vote exchange.

We have shown that when vote exchanging occurs, the majority of the votes exchanged come from outside the country in which the promotion is held. In other words, users who decide to exchange votes are not usually from the same country. One of the first and most effective measures for preventing vote exchanging is the option to filter the contest by country, so that only users from one specified country can enter a contest or vote for entries. The filter-by-country system functions according to a user’s IP address. When this restriction is applied, a photo or video can only receive votes from an IP that corresponds to the specified country.

It’s quite common for users to use programs to mask their IP address. Practices include connecting to anonymous proxies and invalid IPs, or connecting via satellite; using generating software and changing the IP. The country filter can block these types of practices. For more information, follow this link.

3. Maximum number of votes/entries per browser/IP. Minimize the impact of users who manage multiple accounts.

This option allows you to limit the number of times a user can vote from the same computer. In many cases, when a user obtains a lot of votes in a short space of time, the votes all come from the same device. This mechanism of anti-fraud control is the first to be triggered when a user tries to vote various times from the same computer using multiple accounts. The default value is 3 attempts, but this can be modified by the administrator. For more information, follow this link.

This option enables you to limit the number of seconds after which the same IP can vote again for the same entry. If a user manages various accounts and uses just one internet connection, he/she will have to wait before being able to vote again. This same filter can be used for controlling the frequency of entries to sweepstakes and contests from a single IP. For more information, follow this link.

5. Verified users. Delete users who do not have a real identity behind them.

A user who has verified his/her Facebook account is obviously more likely to be a real person. This measure limits the impact of those Facebook accounts without a real identity behind them. Facebook considers an account to be verified when it meets any of the following three requirements:

In voting contests it is common to see attempts at obtaining votes via specialized software which increase the number of votes automatically and rapidly. The Easypromos platform incorporates a detection system for this type of behavior which immediately blocks such actions. This system includes a monitoring mechanism with real-time alerts that notifies the Easypromos security team the moment it detects a hacking attempt or an abuse of the platform.

Here is all the information that an administrator has available for analyzing a voting or recruiting contest: 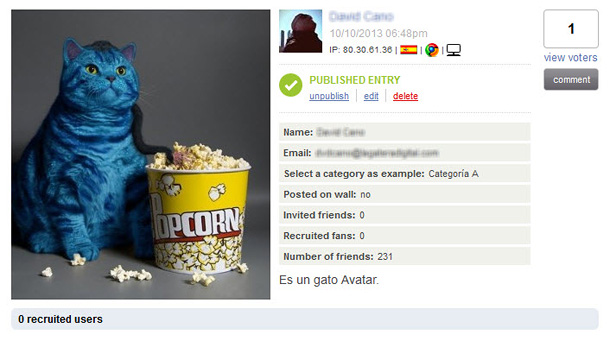 For greater convenience, the administrator can download users’ information to an Excel or CSV file:

As additional tools, the administrator can delete votes from the administration panel. He/she can also unpublished or delete any entrant, preventing them from taking part in the contest. The control panel also provides navigation tools for searching, filtering and checking information about participants quickly, making promotion management more efficient.

1. Don’t give the prize to the most-voted entrant or to the entrant who has recruited the most users. We suggest the following alternative mechanisms for selecting winners in voting and recruiting contests:

2. For voting contests, we recommend that you always utilize the Premium or White Label platforms, as these give the administrator access to all the preventative measures required for minimizing fraud and generating better-quality contests. In Basic promotions it is not possible to obtain information about voters for analysis or use preventative measures such as the country filter.

3. Publish information about voters and recruiters. If a name and face can be put to each of the voters, there will be less confrontation between those competing for the prize.

5. Give a double prize. Award users who obtain a minimum number of votes or recruited friends by giving them the better prize, but also consider sharing a variety of smaller prizes among all users who take part in a contest. This could be done via a final sweepstakes or by using a ‘winning moments’ type of promotion. This double prize would incentivize users and encourage more people to take part.

6. Adjust the anti-fraud value according to your needs. The default values that come with Easypromos have been set according to our extensive experience of providing a platform for promotions. In most cases these values will work well, but there may be some cases in which they are too restrictive or not restrictive enough.

7. Hide the vote counter. In Easypromos there exists the possibility for users to vote without being able to see the entrant’s vote counter or classify entries in order of the most voted. This option can be useful for minimizing competiveness between entrants.