La Bolsa del Corredor is a website, run by Diario Sport, which specializes in content related to running. It also provides organizational services, strategic promotion and communication of sporting events.

Under the title, “Reto Sport Berlín” (Berlin Sport Challenge), a contest was held which consisted in choosing two contestants, one male and one female, to win a place in the starting line of one of the greatest marathons in the world: the BMW Berlin Marathon. This exciting prize included the travel costs, accommodation, a race number, a personal trainer for fourth months, physiotherapy and osteopathy services, a stress test, sports coaching, podiatric treatment (insoles), sports nutrition and a full kit.

The format Talent contest in two stages with voting was chosen which would allow for the selection of a group of contestants who would stand out for their abilities to meet the challenge (availability, capacity for improvement, ability to assimilate training, motivation, camaraderie, etc.) without adversely affecting the diffusion of the promotion or the level of participation. Two stages were established: 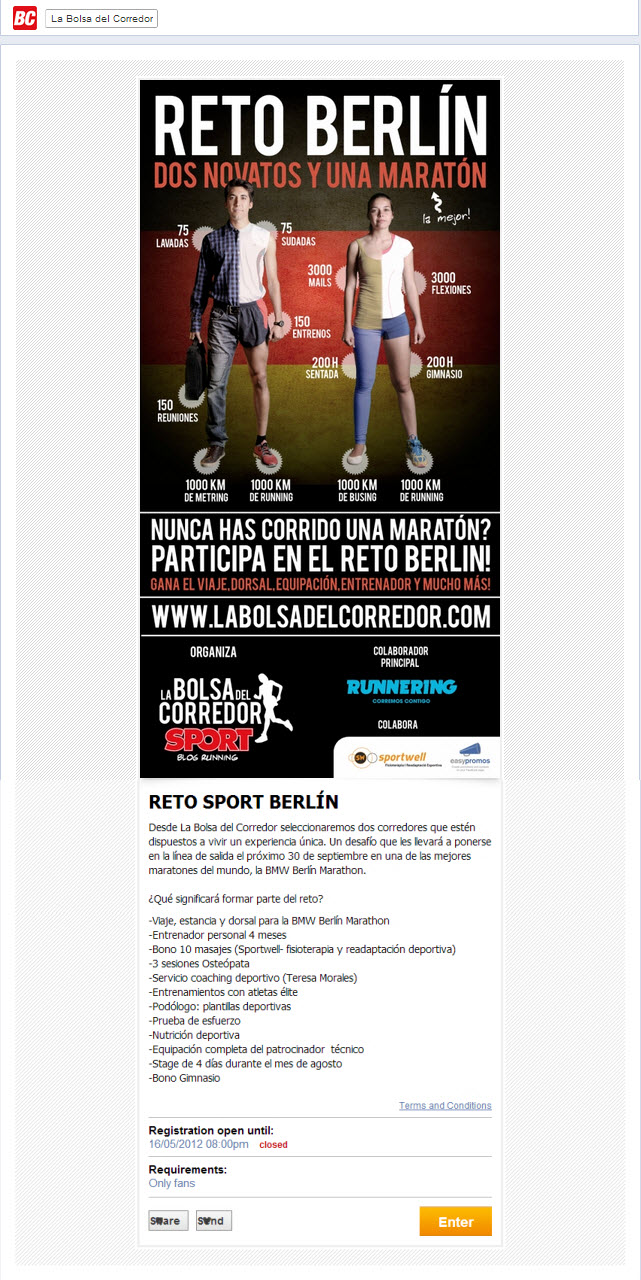 Within just a few months of its existence, La Bolsa del Corredor was aiming to promote its activities to a highly targeted group of fans, while offering content of interest to their audience. The aim was also to find the formula that would work as a calling card to specialized companies in the sector, highlighting the potential and development of the services offered by the site.

Easypromos Premium was used as a tool for giving an effective response to the contest dynamic in its two stages, guaranteeing a high level usability for participants who wished to capture votes from among their friends, providing virality, client control and an attractive design. Both online and offline campaigns were active in parallel via their respective channels of diffusion to communicate the contest to their users: social networks, blog posts, brochures and newspaper adverts.

There were a total of 139 participants in the casting stage (training). 39 of these took active part in voting, contributing a total of 4,900 votes and 3,439 new Page likes. 21 of these contracted the site’s sports consultancy services once the process was finalized.

Over the next five months, the impact of the different publications on the website that were related to the contest reached a total of 250,000 visits. 112,000 of these were unique visits.

“The versatility and ease of use of Easypromos enabled the optimum functioning of the campaign. As a tool, Easypromos adapted itself perfectly to our needs and helped us to obtain results that surpassed all our expectations. Months later, we repeated the experience, triplicating the results of the first edition.”