Video voting contest to choose 5 projects to be presented live

The Junior Achievement inter-university entrepreneurial program used the Easypromos platform to set up a video contest for its students. Each participant was asked to upload a video presenting their project, which they then had to promote to try and obtain the most votes. The creators of the five most popular videos were allowed to present their project in person at the SUP Ventur Café event. Read this article to learn more about this case study.

The Junior Achievement Foundation is the largest educational non-profit organization in the world dedicated to entrepreneurial education. It trains young people via programs based on a “Learning by doing” methodology. Since 2001 we have been working in Spain to boost young talent and encourage young people’s entrepreneurial spirit. We aim to provide them with the necessary tools for fostering the key skills that will aid their transition into the professional world.

Startup Program is one of the programs developed by the Foundation in collaboration with the Fundación Universidad-Empresa. It is an international organization, working in 17 European countries – all members of Junior Achievement. It consists of a nationwide inter-university entrepreneurial program, bringing together entrepreneurial minds from some of the top Spanish universities. By way of a voluntary tutoring and mentoring scheme students develop their initial proposal into a valid business plan, the aim of which is to convincingly demonstrate the viability of their idea. A national final is then held in which a winner can go on to compete with the SUP winners of the other 16 European countries in an international final.

The SUP VENTURE CAFÉ (#SUPMVC) was the first networking event created by the Start-up Program (SUP) and Madrid Venture Café (MVC) to provide entrepreneurs, tutors and advisors with a meeting point in which to hold a relaxed exchange of ideas, promoting synergies via networking. It is principally aimed at connecting the young students participating in Junior Achievement’s “Start-up Program” with successful entrepreneurs.

With the objective of making the event more attractive and dynamic we proposed the presentation of two case studies of previous SUP editions (Radarbar and One2Park). We also gave five projects taking part in the current edition the opportunity to present their pitch at the event. This enabled participants to promote their project and receive feedback from experts, helping them prepare themselves for the national final. 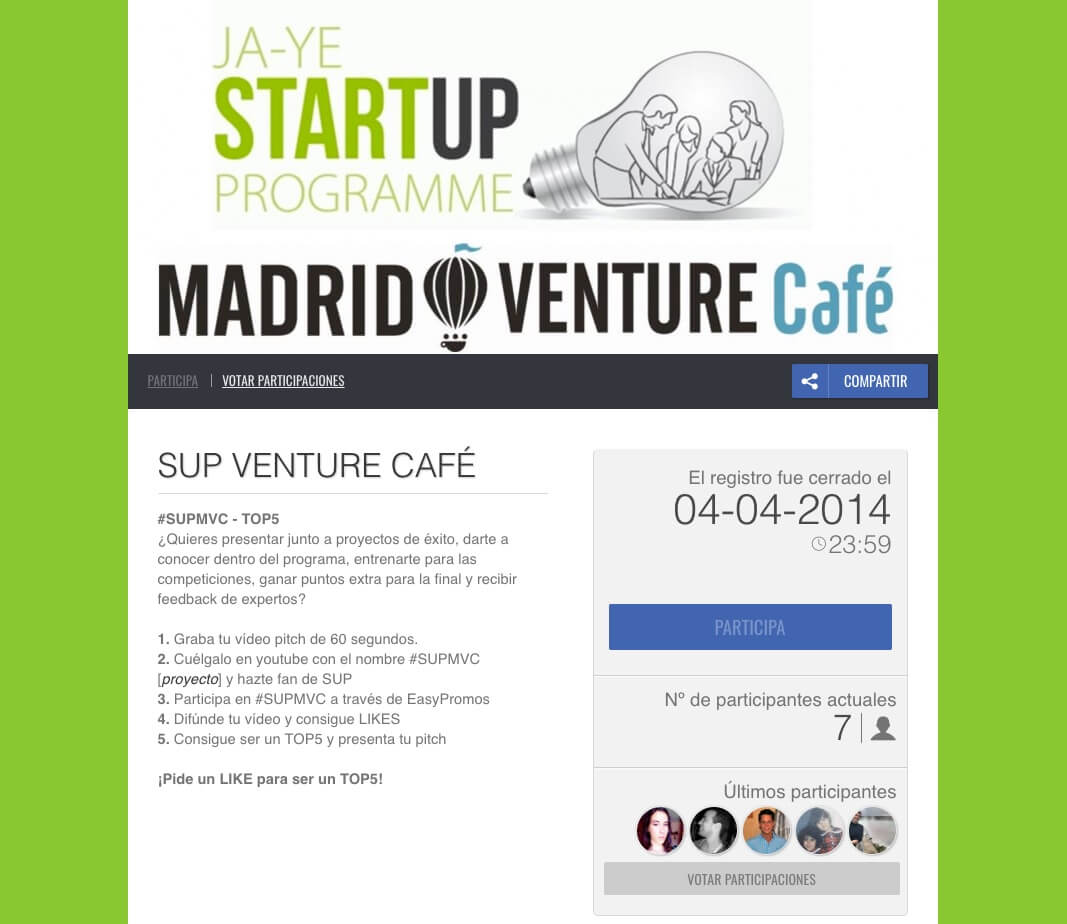 Given that around sixty projects take part in the program, and only five of those get the chance to feature in the event, a challenge was launched on Facebook inviting participants to record a 60-second video pitch introducing their projects. Participants posted these videos to the Timeline of the Easypromos contest, and then set about promoting their video presentations across the social networks, trying to obtain enough votes to get in the TOP 5. To make all this possible a video contest with voting was created using Easypromos Premium.

The benefits of the contest were numerous. It enabled the event to be organized and promoted easily and professionally, reaching a high number of people. The number of Facebook followers reached 1,000 and the publications were seen by more than 600 people.

“The goal was to encourage our entrepreneurs to participate in social networks, giving them the chance to be both protagonists and leaders in this initiative carried out via Easypromos. Their objective was to obtain the most votes for their video pitch. Easypromos is the ideal tool for carrying out these types of networking activities. It’s simple, intuitive and efficient.”