New design for your promotions: more customizable and viral

The new modification to Facebook’s regulations, which means it is no longer possible to obligate users to like a Page before they can participate in a promotion, requires a reorientation of online campaign strategies. As a result of this modification, Easypromos has updated its platform with a variety of new features and improvements. But the objective behind this update is not only to comply 100% with Facebook regulations, it is also to help administrators create campaigns which are more attractive, more viral, and more customizable than before, enhancing the quality of user interaction. In this post we will tell you more about these new features and we’ll explain how to get the most out of them when creating your next promotions and contests.

In this post you will find out all the new features introduced:

The new design is simpler and cleaner, less overloaded visually, and the action buttons are bigger and more visible. And of course, the design is 100% adapted to all devices, browsers and screens. This new layout design for promotions and contests created with Easypromos has been developed with a view to facilitating navigation and improving the user’s experience, whichever device he or she might be using. 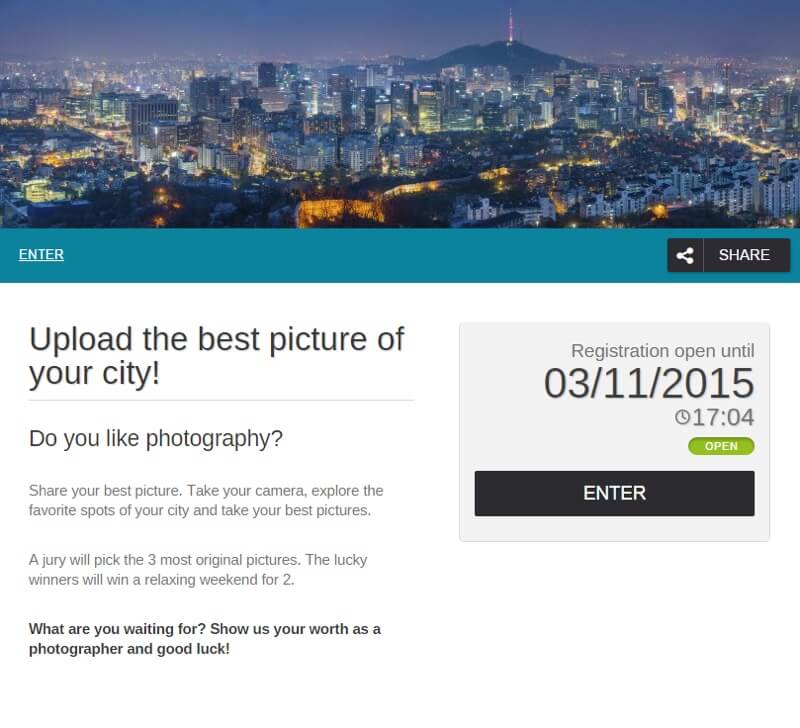 2. Complete customization of colors and typography

We know how important color is to the design of a promotion. Thanks to an intuitive color selector you can now decide which color you would like your buttons and other elements to be, throughout the various pages of your promotion. If you prefer, you can also use the 10 predefined color designs that we have provided.

To complete the customization of your promotion you can also choose which typography to use. You can select one of the typographies that come by default with each of the color presets or you can choose your own style for your promotion texts.

The customization of colors and typographies is available for promotions created with the Premium and White Label versions of Easypromos and it is the first step in a project whose objective is to offer more options for customization so brands can achieve the look and feel that they desire.

As an alternative, we have incorporated the ‘My Networks’ module, which enables you to encourage users to follow the brand on Facebook and/or Twitter, and which is present at different points of the promotion process so users can become followers of the brand at any time. Here we explain how the new ‘My Networks’ system works. [anchor al punt concret on ho expliquem].

The old system of invitations that was available in the final screen of the promotion has been replaced by the Share Dialog system in Facebook which enables the participant to send a private recommendation to a friend. This new system allows the participant to: 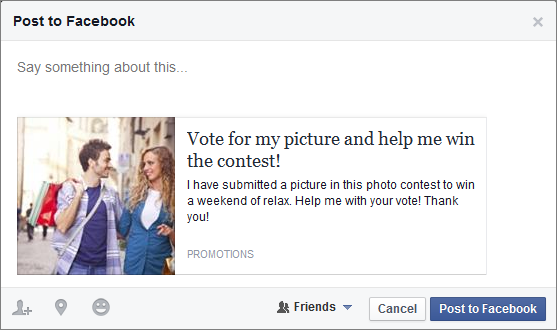 With the aim of enhancing the promotion viralization, the ‘Thank you’ page has been completely redesigned so that the action of sharing is as swift as possible for participants.

In this way, the new final screen presents different ‘Sharing’ buttons which help users to share the promotion once they’ve taken part in it, thus boosting the virality of the campaign:

As another new feature, the final ‘Thank you’ page offers the administrator the chance to control the content that users share after signing up to the promotion and customize the viral messages. To do this, the new final screen enables the following configuration options:

a) Participation content: The user can share the photo, video or story that he/she has uploaded for the contest.

c) Winning moment result: The winning user can share the prize they have won.

d) Recruiting content: The user can share the promotion in order to invite his or her friends to take part.

Consult in detail how the platform’s viral system works.

Tip: This might be useful for a multiple-choice type questionnaire in which you want the final messages to be personalized according to the answers given by the participants. In this way, the participant can share and publish his or her test result.

Learn here how to personalize the promotion’s viral messages. 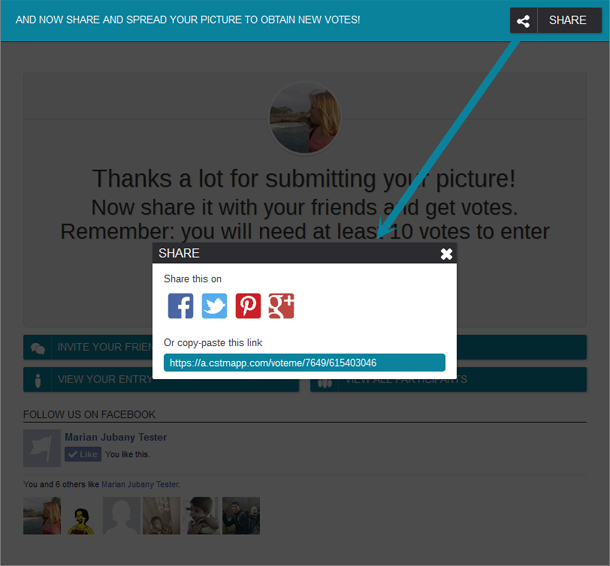 Learn how to personalize the text which encourages users to share the promotion.

Note: In addition, the final ‘Thank you’ page always displays a button for liking the Facebook Page.

With the recent change to Facebook’s regulations it is no longer possible to make it a requirement for users to like a Page in order to be able to participate in a promotion or contest.

As an alternative, all promotions created with Easypromos now incorporate the ‘My networks’ module, allowing you to completely customize the screen that is presented to users before they finish signing up and take the opportunity to encourage them to like your Facebook Page. In fact, it’s possible to suggest as many Facebook Pages and Twitter accounts as you like. 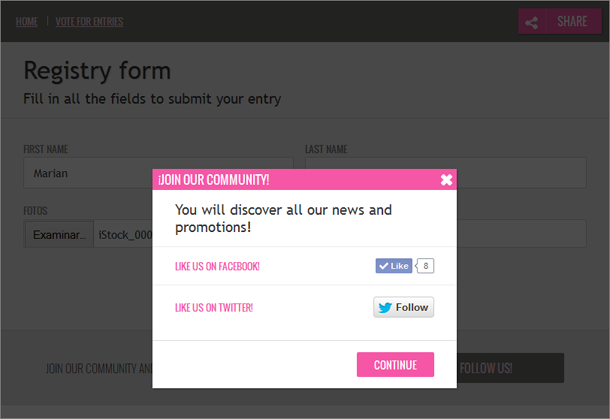 The ‘My Networks’ module is presented to the user as a pop-up menu afte they complete the sign up form. It is also displayed on the final ‘Thank you’ page. Additionally, the administrator can activate the ‘Promotion footer’ which opens the same pop-up menu as ‘My Networks’. In this way, the buttons for following the brand across the social networks are visible during the whole participation process.

So, even though it is no longer possible to obligate a user to become a fan of the Page before they can participate in or vote for a promotion, it is possible to keep showing users different ways in which they can become fans of a Page and follow the brand across the social networks.

Find out here how the ‘My Networks’ module works and how to customize and link it with your social networks.

Digital users are more and more active on the social networks. Because of this, and with the aim of reaching all users, the Easypromos application permits participants to share the promotion across a variety of platforms, including:

Discover how the user shares the promotion across different social networks.

7. Viralization is enhanced when voting

Just as we can no longer obligate users to like a Page in order to participate in a promotion, this also applies to users who wish to vote for one of the contest entries.

However, in a contest with votes, the user votes for an entry because he or she wants to help a friend gain more votes. Bearing this in mind, the application has been designed to give the voter tools for sharing his or her friend’s entry easily across the various social networks (Facebook, Twitter, Pinterest and Google+), in order to help them disseminate their entry and gain more votes.

After a user has voted for one of the contest entries, a window will open thanking them for the vote and providing them with buttons via which to share the entry: 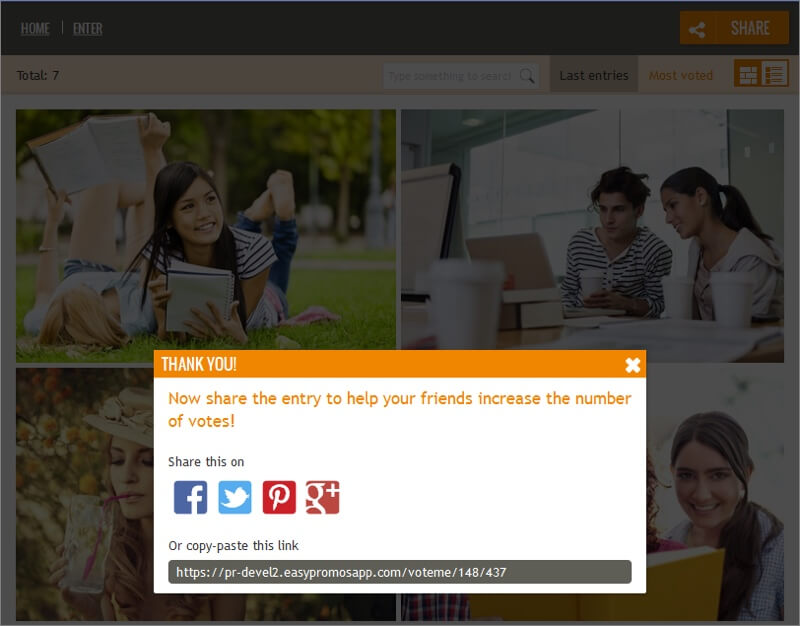 From the control panel, the administrator can personalize the message that appears to the voter after they have voted for one of the contest entries, thanking them for their vote and encouraging them to share their friend’s entry.

Would you like to see a DEMO of all our products with the new layout?

Discover our products list and from there you will be able to access an online DEMO to see all the new features introduced.