Spin the Wheel: What’s the Best Way to Award Prizes?

Ready to run a retro Spin the Wheel giveaway? Before you get started, take some time to think about the best strategy to generate engagement. From free gifts for everyone to daily discounts, grand prize draws to Instant Win games… Here’s what you need to know about designing the perfect prize wheel.

So what do these two options actually mean?

With this option, you give away prizes based on a mathematical calculation of the possibilities. This is a good idea if you have lots of small prizes to give away.

For example, if your prize wheel has 20 sections with 14 possible prizes and 6 empty slots, then there’s a 70% chance of winning a prize (and a 30% chance of getting an empty section with no prize at all). So 7 out of 10 players would get a reward.

In this example of a Halloween prize wheel promotion, there are three different prizes. Each prize appears on the wheel twice, resulting in a total of 6 prizes. And there are 6 empty slots on the wheel – so players have a 50% chance of winning something.

When you set up an Instant Win giveaway, each prize is awarded at a specific time, chosen by you in advance.

So users are actually playing two games, even if they don’t realize it. First, they spin the wheel to find out which prize they could win. Second, the Instant Win dynamic decides whether or not they get the prize, based on the timing.

Both ways of awarding prizes are random. The only difference between them is whether prizes are awarded based on probability or based on timing.

How to choose the best way to award prizes

Still not sure which option to choose? Don’t worry. After walking thousands of clients through their first prize wheel giveaway, we’ve figured out 3 basic rules for choosing the right prize system.

Here are a couple of other factors to keep in mind:

The Instant Win option gives you total control over when prizes are awarded. Use it to give away a few select prizes when you have a lot of followers.

How to time your giveaway for maximum effect

You want to get the most out of your Spin the Wheel game. But how can you be sure there are enough prizes? And what’s the best moment to give away the grand prize? Here’s what we recommend…

If you plan to give away prizes based on probability, but you also have a grand prize which you want to award at a specific time, then you have two options:

When you create a grand prize for your contest, you’ll be able to choose whether it is awarded by “Spinning the Wheel” or “By Random Draw”.

Making sure the prize wheel doesn’t run out of rewards

If your spin the wheel promotion runs out of prizes, the wheel will not deactivate automatically. The game will stay open – but the players won’t win anything.

So you’ll need to keep an eye on the number of prizes available throughout the promotion. You can shut the game down manually as soon as the prizes have all been awarded. We recommend taking this step so that your followers aren’t disappointed.

Read the Spin the Wheel tutorial to get more detailed tips.

In this section, we’ll break down some of the most common prize wheel formats. Use these case studies to help decide which strategy will work best for your brand.

Head to our blog post full of real examples of prize wheel promotions created with Easypromos.

Give away a few prizes over several days

If you want to give away coupons or discounts, you can set these up as Instant Win rewards on a prize wheel. The wheel-spinning dynamic makes the rewards more interactive and exciting.

With this option, you can also control how often discounts are awarded. For example, you could give away two discounts every day.

Another popular type of Spin the Wheel promotion is when you reward customers for making a purchase. It’s easy: you simply set up extra requirements, such as uploading a receipt or validating a code, to access the prize wheel. This instantly limits the number of players and makes sure that the prizes are given away gradually.

We recommend this type of game for promotions which last several weeks. You’ll need plenty of time to advertize the rewards, and for customers to make purchases and join the promotion. You can award prizes by probability or with Instant Win, depending on how many prizes and customers you expect to have.

In the example below, a restaurant wanted to encourage more diners to visit them. Once diners had paid their bill, they received a receipt with a unique code on, giving them access to a prize wheel full of restaurant discounts. This was a great way to reward customers and keep them coming back for more.

Have you decided how to run your prize wheel giveaway? Whether you have a whole campaign in mind, or still need some tips, we’re here to help. Chat with our support team and we’ll help you pick the best option for your business. 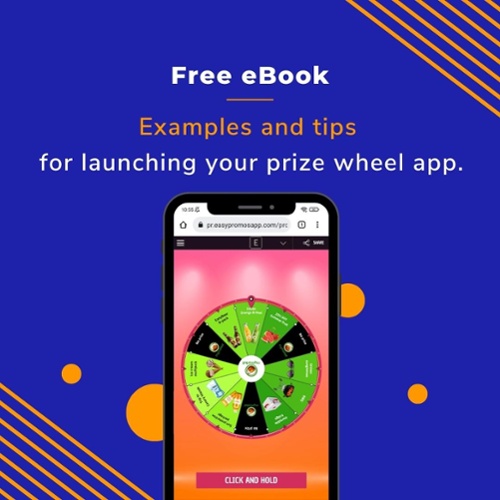