What are the differences between sweepstakes and contests?

When it comes to laws about marketing promotions such as sweepstakes and contests, often just called ‘giveaways’, the definition of each is important. There are different things that should be taken into account, for example, what participants have to do to enter and how the winner is selected. Here is a short definition of each:

Sweepstakes are prize giveaways where the winners are chosen randomly. Sweepstakes are used by brands to give away anything, from product samples to big prizes, such as a car. The entire Easypromos Giveaways category is included in this group.

Contests are where the winner is selected based on some skill or merit. It can, for example, be the best photo, the funniest story about your toddler, or other criteria as long as the winner is not selected by a random determination. A contest can be organized using an Easypromos Photo Contest, Video Contest or Writing Contest where the winner is selected by public voting or by a jury. Again making certain that your promotion is in compliance with the laws of the states where the promotion is conducted since the majority of states will look at these promotions to determine whether skill or chance is the predominant factor in selecting a winner. This can be problematic for promotions where public judging is the sole means of selecting a winner.

Giveaway is the catchall name many marketers and influencers use for either Sweepstakes or Contests. But a ‘giveaway’ is a marketing promotion where everyone who participates gets the ‘gift’. A familiar example would be a bobble-head night at the local sports event where everyone with a ticket would receive the item while supplies last.

It is important to be aware of the differences and to use the correct name, both in the communication and terms and conditions.

If a sweepstakes or contest promotion allows nationwide participation, the promotion must comply not only with federal regulations but also the laws of each state. This is where having clearly defined terms and conditions of the promotion is important. This is because the Official Rules are where you state the rules and where you can cover your brand in case any problem arises.

If you run a promotion for residents of all of the United States, you need to be very careful in clearly stating your terms and conditions of the promotion. You should include, at the very least, a sentence like this: “All federal, state and local laws and regulations apply. Void where prohibited.” The last part of this sentence means that if for some reason individuals from a specific jurisdiction should not be entered, then anyone in those jurisdictions who do enter would have their entry voided and could not win.

Some other important legal points, which need to be considered:

Who can enter my sweepstakes or contest?

For sweepstakes, an important concept is that of “Equal Dignity”. This relates to four aspects of the sweepstakes: (i) method of entry, (ii) opportunity to win, (iii) claiming prizes, and (iv) prizes awarded. Equal dignity is not something that is precisely described in the laws governing sweepstakes. But it is part of fair dealing laws that apply to all consumer marketing and advertising promotions. Equality dignity requires that all entrants are treated the same regardless of how they entered. This means that those who enter without purchase have their entry given the same likelihood of being selected as the entry associated with a purchase; that the ‘free’ method of entry is as easy as any paid entry, and how they claim a prize and the prizes available to them are the same.

By using an entry platform such as Easypromos, you can avoid many ‘equal dignity’ concerns. Not only does it help to aggregate different types of entry methods, but it can ensure equality and provide transparency regarding the number of entries received for completing different tasks.

Consideration is value given to the sponsor, the administrator, or a designated third party. It comes into play mainly with sweepstakes. Purchase is the most common type of consideration. In the current age of technology and social media though, it’s unclear if some actions are deemed consideration since no court has ruled upon things like social shares, comments, likes, and follows. What we can do is look to existing laws and legal decisions and compare them to things courts have said were consideration. For example, if it takes a great deal of time for the entrant or is something of significant non-monetary value to the sponsor (or administrator or designated third-party) that could be deemed consideration.

With regard to contests, many running promotions are not aware that the rules for consideration are different. While with sweepstakes it is clear for every state that consideration (the general category, not just payment or purchase) will make your sweepstakes an illegal lottery, for a contest (a game of skill or merit) there are nearly a dozen states with laws that prohibit requiring payment to enter certain types of contests.

It is because of these nuances that it’s important to work with a professional. Not only are there many grey areas as to what consideration is with regard to sweepstakes, but there are limitations for contests as well. Using a platform like Easypromos can help you create entry methods that are legally compliant and provide you with data should regulators come calling.

An important part of equal dignity is to offer at least one Alternate Means of Entry (AMOE) if you have a method of entry associated with a purchase or if there are ways to enter that do (or could be seen to) confer consideration to the sponsor, administrator, or designated third-party. Since we’re not certain that things like follows, likes, tags, and posts are, indeed, consideration the best way to protect yourself is to have a valid AMOE.

The laws do not say anything specific about the winner selection. But promotion organizers must make sure promotions are carried out under proper supervision, provide adequate resources for administering the promotions, and make sure enough time is allocated for each stage of the promotion, for example, judging. Some states do regulate the award of prizes.

These important factors can be met by using the Easypromos platform. One of the most important things is to ensure that potential winners met the specific entry criteria. With a data-driven platform you can make sure the entries were during the correct dates and times, were not from a prohibited location, and any required steps were followed BEFORE you reach out to the potential winner.

Federal tax laws require that certain prizes be reported to the Internal Revenue Service. Any prize valued at $600 or more MUST be reported to the IRS on a Form 1099. This means sponsors or administrators of the promotion must collect the winner’s social security number and issue the proper IRS form at the correct time. In addition, prizes valued at $5,000 or more require the sponsor to withhold 25% in taxes and pay that to the IRS at the time the prize is awarded. For non-cash prizes, the winner would be required to give the sponsor the money to pay the taxes unless the rules state the sponsor is responsible for the tax payment.

The Easypromos platform offers all the tools for the sweepstakes and contest organizers to create and carry out legal campaigns. But as you’ve seen, there are many things that affect the legality and if in doubt, we always recommend that you seek qualified legal counsel. You can contact Sara F. Hawkins, who provided us with her extensive knowledge and impressive experience that was much needed to create this legal guide Sara has been practicing law and helping entrepreneurs for over 20 years. As one of the few long-term practitioners in the sweepstakes and content space, Sara has worked with clients of all sizes - from global multi-nationals to solo entrepreneurs - to help them bring their marketing promotions to life in a way that is legally compliant yet still creative. 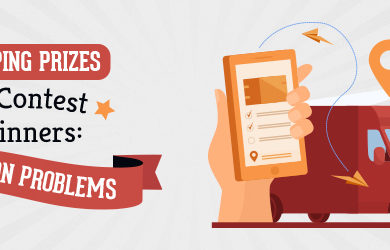 Running contests and giveaways for your followers can be fun all around — people love having the chance to get something free, and it can be rewarding to set up a giveaway that encourages a lot of interaction and engagement.…
Learn more

You’ve spent hours setting up your promotion, checking the settings, working with your graphic designer, editing the perfect copy, and you’re finally ready to launch - just in time! But there’s one more task on your to-do list: Test the…
Learn more